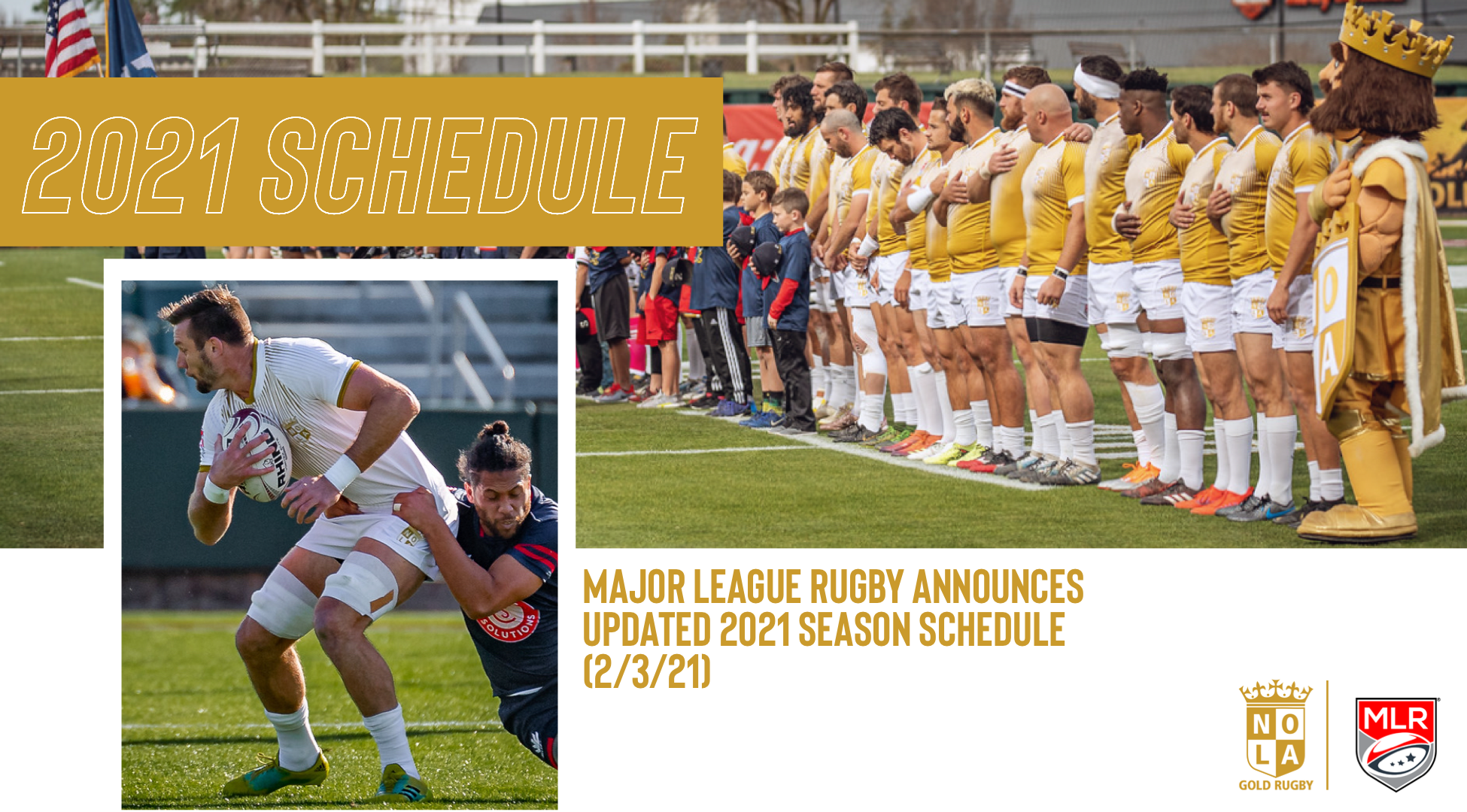 Major League Rugby Announces Updated 2021 Season Schedule
San Diego and Toronto Teams Announce Temporary Venue Relocation
DALLAS (February 3, 2021) – Major League Rugby (MLR) announced today an updated 2021 season schedule reflecting the postponement of the Dallas Jackals inaugural season and the temporary relocation of the San Diego Legion and Toronto Arrows. Opening day for MLR’s fourth season will remain on March 20, 2021. The season will feature 12 teams competing throughout North America over 18 weeks in a two-conference balanced schedule. The conclusion of the regular season will bring the MLR Championship Series, with the top two seeds from each conference qualifying for the postseason. The playoffs will culminate with the Championship Final to be held August 1, which will be broadcast nationally on CBS.
“The MLR and its teams are working together proactively to ensure we are providing a safe and entertaining product in 2021,” said George Killebrew, MLR commissioner. “We have worked diligently to create a revised balanced schedule and maintained our season start date on March 20. We have also addressed the temporary relocation of the San Diego Legion to Las Vegas for the 2021 season, as well as the Toronto Arrows starting play in Atlanta and monitoring their options as the season unfolds. The two teams have worked in concert with the league, showing a dedication and passion to keep professional rugby moving in the right direction in North America.”
The 12 teams competing in 2021 are split into two conferences. The Eastern Conference features six teams (Rugby ATL, New England Free Jacks, NOLA Gold, Old Glory DC, Rugby United New York, Toronto Arrows) while the Western Conference will now feature six teams (Austin Gilgronis, Houston SaberCats, LA Giltinis, San Diego Legion, Seattle Seawolves, Utah Warriors). Each team will play a 16-game regular season schedule featuring 10 in-conference games and six out of conference games, with two bye weeks each.
The Toronto Arrows will be sharing facilities with Rugby ATL while the San Diego Legion will be relocating to Las Vegas to play in a yet to be announced venue.
“Our organization has worked closely with public health officials at various levels over the past several months to consider plans that would allow us to begin our 2021 season on home soil, but given the ongoing public health situation, along with the pressing need to determine where we will play our home matches, circumstances have dictated that we will start our 2021 season in the United States,” said Mark Winokur, Toronto Arrows Chief Operating Officer and General Manager. “Our top priority has always been to play our home games in front of our fantastic and dedicated fans in Toronto, but in order to compete for the MLR Shield this season, we must start south of our border. The staff at Rugby ATL have been incredibly supportive and have gone the extra mile to make sure we can provide a safe, professional environment for our players and staff, and we’re looking forward to playing there.”
“San Diego Legion playing the 2021 season in Las Vegas demonstrates our commitment to getting back on the field and helping drive the success of Major League Rugby,” said Darren Gardner, Executive Chairman at San Diego Legion. “San Diego Legion will be doing all we can in 2021 to win an MLR Championship for America’s Finest City!”
Opening weekend on March 20 will feature a 4 p.m. ET matinee in New Orleans, as NOLA Gold hosts Old Glory DC. Other highlights of the League’s opening day include the Los Angeles Giltinis’ inaugural game hosting the New England Free Jacks, and the Houston SaberCats hosting the 2019 champion Seattle Seawolves.
Other notable games for the regular season include:
• March 28: West Coast rivalry – Los Angeles hosts Seattle
• April 3: First Matchup of the Texas Cup — Austin hosts Houston
• April 17: 2019 playoff foes meet – Toronto hosts Seattle
• April 24: A SoCal battle between –Los Angeles hosts San Diego
• May 9: 2019 Championship Rematch – Seattle hosts San Diego
• May 23: Rugby United hosts New England Free Jacks
• June 5: Second Matchup of the Texas Cup – Houston hosts Austin
The entire MLR regular season schedule is linked here. Broadcast information will be announced at a later date.
There will be a variety of pre-season activities in each market as well as a national media day where each team will provide standout players for national and international media availability.
Like many major professional sports around the globe, MLR adjusted its 2020 season schedule due to the pandemic and turned its attention to ensuring the league would rebound with a strong showing in 2021. League and team officials have been diligently working to build strong rosters and enhance the fan experience for the upcoming season.
MLR is leaning on its experienced medical committee that is dedicated to setting policies and procedures that ensure the safety of athletes, fans, and staff. MLR will continue to consult with the committee, teams, and players, to always put safety first when making decisions as the COVID-19 crisis continues to evolve.
–MLR–
About MLR:
Major League Rugby is a professional sports league entering its fourth season and representing the highest level of rugby competition in North America. The League evolved from seven teams in 2018 to 13 teams in 2021, 12 from the United States and one from Canada. Matches are televised on CBS Sports Network, FS2, and other national and local market platforms. All matches are available on Facebook Live for international fans. MLR prides itself in fostering intense and high-stakes competition, while bringing together a passionate community built on the values of Respect, Inclusivity, and Tradition. For more information about MLR, visit www.MajorLeague.Rugby