Gold remain atop MLR standings despite loss at Glendale

Despite the Gold’s stunning 34-33 defeat on the final play against Glendale, NOLA remains atop the Major League Rugby entering Week 11. 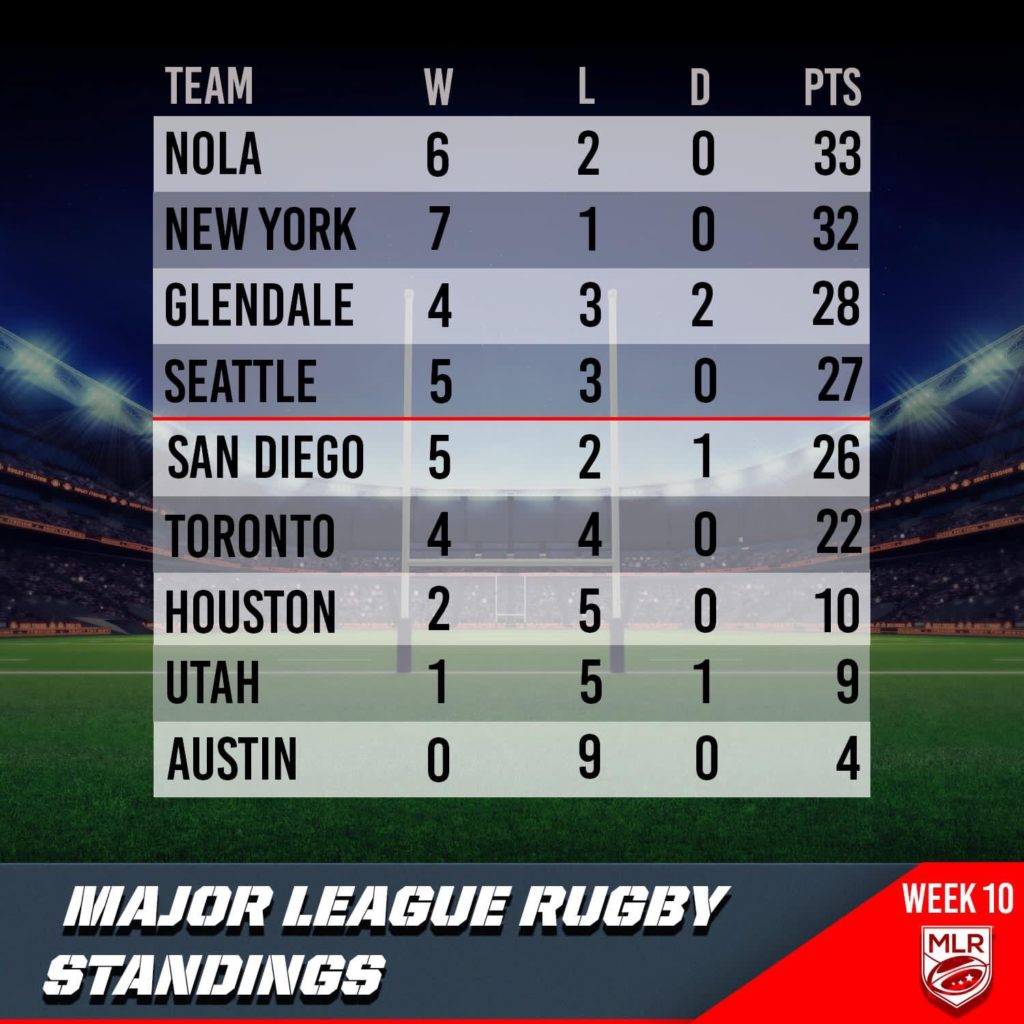 After going down by 17 points in the first 14 minutes of the game, the Gold answered with three straight tries.

Nikola Bursic, who got his first start of the season, scored first for the Gold in the 24th minute after battling on the Glendale try-line, cutting into their lead 17-7.

Captain Eric Howard followed shortly after punching in one of his own down on the try-line in the 29th minute, with the Gold now down 17-14.

With NOLA retaining possession on their line-out, they executed a play off their set-piece with their backs as Con Foley dished to Tim Maupin, who galloped in at the 34th minute mark as the Gold took their first lead of the game 21-17.

MAUPIN! The wing blazes into the in-goal area for five to take the lead right before half
–
21-17, NOLA, 36′#GLENvNOLA pic.twitter.com/svVWbgotZt

The beginning of the second half, however, was all Glendale as the Raptors quickly got another try with Luke White powering in for a score in the 44th minute, now 24-21 with the Raptors reclaiming the lead.

Later in the 60th minute, Glendale Captain Shaun Davies dummied a defender off the scrum for a big line break as Malon Al-Jaboori followed in support and finished off the big run with a score, extending the lead to 31-21.

With under 10 minutes remaining, the Gold battled back again.

After working down inside Glendale’s five-meter line, reserve forward Cam Falcon dove in for a score in the 71st minute. JP Eloff, however, wasn’t able to convert on the kick as the Gold remained down 31-26.

Five minutes later in the 76th minute, Glendale’s Zach Fenoglio was given a yellow card and the Gold quickly capitalized on the opportunity.

After feeding in a line-out on Glendale’s 22-meter line, the Gold formed a maul and slowly marched down to the Raptors’ try-line.

Howard, who was at the back of the maul, was able to get in for his second score of the night, as the Gold now lead 33-31 in the 78th minute.

Howard dots it down near match-close for his second try of the match and to put the Gold ahead
–
33-31, NOLA, 78′#GLENvNOLA pic.twitter.com/66JlaHjrTW

Nearing match-close, the Raptors retained possession and battled back inside the Gold’s 22-meters.

In 80th minute, Ignacio Dotti was called for a yellow card, then on the final play of the game, Robbie Petzer knocked through the penalty kick as the Raptors claimed the 34-33 win.

Despite the loss, the Gold received two bonus points for scoring four or more tries and losing by seven points or fewer.

The Raptors edge the Gold 34-33 at match-close, sealing the win at Infinity Park
–#GLENvNOLA pic.twitter.com/tOPDnZQBDA

The Gold look to bounce back this week with another road matchup against the sixth place Toronto Arrows (4-4, 22 points) this Saturday, April 7.